I cannot even dream about something like this!, says my dear friend, Krishna, the proud mother of Saloni Dalal, who last week made so many headlines that Sachin Tendulkar tweeted about her. (Sachin’s tweet on Saloni Dalal.) 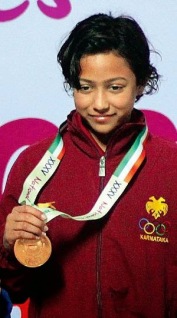 For those still unaware of Saloni’s claim to fame; Saloni won a bronze medal in the 200mts breaststroke swimming at the National Games2015 (touted to be the Indian Olympics). But that’s not it, she won this in the Open category, i.e. while competing against athletes twice her age, some previous National Champions, record holders and anyone who’s a who’s who of Indian women swimming, and became the YOUNGEST medal winner in the National Games only falling short of half a millisecond from the Gold medal.
If you meet Saloni, you’d find her a normal 12-year old, in fact so puny that her coach got constantly mocked upon for enrolling her into the championship. Not to mention, her Gujarati heritage…which is well-known for lot of things, but not sports!
So what’s the secret?
Of course, you need to have talent and the drive to make such a mark. But it’s not just that.  In fact, it’s not just about her too. It’s about the winds beneath her wings.  It has a lot to do with her parents, my dear friends, Krishna and Kaushal.

I remember the tale when Saloni emphatically announced, a few weeks prior to the championship, that she’s quitting swimming!

Imagine the tact required to get her out of that negative thought process!  And imagine what it takes every day to keep a 12-year old motivated to swim for 5 hours!  That too, in a Bangalore public pool that is an hour and half away from her house!

I’ve seen both of them make countless personal (and professional) sacrifices to give Saloni the attention she needs.  But again, making sure that the extra attention doesn’t affect their younger son. They had to find her the right coach, the right counsellor, the right diet…And to keep her fed every half hour, because she’d burn up calories faster than a bird! And while doing all this, never letting their expectations or disappointments impose on her!  But these were not even the big challenges.
Their biggest challenges were to find the fine balance between when to hold back and when to push;  to let her swim in the allergy seasons, knowing very well that her allergies could act up and maybe even cause a serious lifelong ailment for her; to channelize her adolescent crankiness and to maintain normalcy around her while she prepares for something extra-ordinary.
A National Games win is an apt reward for the Dalals! More importantly, the tweet from Sachin Tendulkar, the sportsperson Kaushal has idolized growing up. I feel happy success came to people who are worthy of it (and of course, to people close to me J)! But giving an ode to them would be wrong too…

This is really an ode to all those hundred other parents who toil equally for their children, but never see the medal around their child’s neck.